On Brent’s (and my) birthday earlier this year, we went to dinner at our favorite Thai restaurant in Chino Hills. Halfway through the meal, Brent said he felt something weird in his mouth — his first tooth fell out! After searching the table and scrounging around on the floor, we realized he had swallowed the tooth! Definitely made for a memorable first lost tooth!

I came across this article with a few interesting suggestions for teaching about dental care for young kids and the Tooth Fairy. We’ve thought about using other tooth fairy gifts instead of money, but the kids are also at the age where they’re still think $1 is a lot of money! We’ve also considered buying an inexpensive tooth brushing timer

for the kids, similar to one I had growing up.

“It’s important to teach children the importance of dental hygiene at an early age. Children should begin brushing as soon as their first tooth appears, and healthy habits of cleaning teeth for two minutes twice a day will help children to have better oral (and overall) health. However, it’s hard to effectively communicate the risks of gum disease, and the harm caused by decay, especially when children are young and dental health problems seem so far away.

Enter the tooth fairy, one of our favorite childhood legends. Not only is she a fun story to tell your children; she’s also an excellent opportunity to teach kids to value dental health and be diligent in their own personal habits.

1: Leave something besides cash

Most children expect to see a small pile of change under their pillow, after leaving their lost baby tooth there the night before for an exchange with the tooth fairy. However, have you ever thought about providing something besides change, or something in addition? Consider what the tooth fairy would like to share with your child in order to encourage them in their task of perfect dental health. It might be a brand new toothbrush, or a fun new flavor of paste.

The average price of baby teeth has gone up significantly in the past decade, and a report from Visa recently announced that the average payment hovers around $3.00. However, have you ever considered varying the amount that the tooth fairy pays for teeth according to the quality of those teeth? If a child gets $5 for each pristine, cavity-free tooth, versus under a dollar for one with a filling, they’ll be much more motivated to keep as many teeth as possible free of decay. After all… you already paid a good amount for those teeth with fillings in them, didn’t you?

A personal touch from the tooth fairy can give kids a special boost. Encourage a more personal-feeling connection with this pixie, and she’ll soon become a powerful motivator next time you’re trying to get your children to brush their teeth before bed. “What would the tooth fairy say?!” is a lot more effective when your children already feel like the tooth fairy is personally vested in their dental health.

So, in that vein, consider leaving a little note along with the change, wherein the tooth fairy thanks your child for their beautiful baby tooth, and encourages them to keep up the good work. This link has some other fun ideas for adding a little something special to the tooth fairy exchange.

Kids don’t start to lose their teeth until about 6 years old. However, they should be caring for their teeth long before then. In fact, the American Association of Pediatric Dentistry recommends that children visit a pediatric dentist by age 1, or when they get their first tooth. So, you should consider starting the story of the tooth fairy early, in order to build some hype. Make the most of fun opportunities for your children to meet the tooth fairy (for example, at the local library or at your pediatric dentist’s office) and to learn more about her. Check out books that tell her story, and encourage your child to write a letter, or draw a picture for the tooth fairy when she comes to pick up a tooth. As a bonus, these little letters are wonderful mementos as your children grow.” 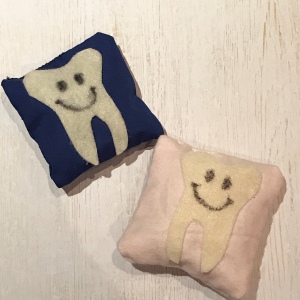